A hay bale is a farm implement used to compress a cut and raked crops such as hay and silage into compact bales that are easy to handle, transport, and store. Many small farmers are finding that these hay baling machines are the best choice for getting their hay in the barn. The baler works on the same principle, of rolling the hay inside a chamber until it reaches a certain size, and then wrapping the bale with either twine or net and ejecting it out the rear of the machine.

Hay balers are of two major types namely cylindrical or round bale type and rectangular type. The two   shapes of bale have their own benefits and uses. 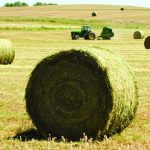 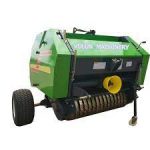 Round bales as the name suggests can be left in the field as they are more weather proof as rain runs off them, and they can also be rolled out in the rainy season if used for bedding. The weight of these bales depends on the size of the bale which is usually 4 to 5 feet, and whether they are packed as hardcore or soft core

Round bales have the ability to shed water much better than square bales, which can allow round bales to be stored more easily in the field and for longer periods of time at a lower cost.

Rectangular bales are easier and safer to stack, either on a trailer for transport or in the barn. They also help to fill all the available space in the barn so you can get more tonnage in the barn. As you would have seen driving through the countryside, round bales seem to be the most popular out of the two types.

Rectangular bales have a greater bulk density and are easier to transport and move than round bales. They also have higher field efficiency because square bales can be ejected from the baler without stopping during operation. Additionally, large square balers have a higher upfront cost than round balers which makes purchasing them more difficult for smaller scale farm operations. Storage of rectangular bales is more difficult than round bales because they must be under a structure or out of the weather to decrease mass loss due to weathering.

The system design components of hay baler machines consist of the following parts;

Lifts the hay from windrow and carries it to the auger or feed rake. The compressors hold the hay down for uniform feeding and prevent strong winds from blowing out of the pickup.

The compressor holds the hay in place so that the auger can feed it into the bale chamber.

The feed teeth gently rake the hay from the ground to prevent losses of leaves and ingestion of rocks or debris into the bale chamber.

The bale chamber contains a plunger that drives in and out each time picking and compressing hay into the desired shapes. The plunger also cuts the ends of hay to make bale uniform size.

The tension section has got bars that keep the bale tightly compressed until enough hay has been processed to complete the bale.

Has got a mechanism that wraps the bale with two lengths or twine and ties it securely when the correct length of bale is achieved.

The working principle of hay balers depends on the type of baler that is used whether cylindrical or rectangular type.

The cylindrical type of hay balers produce round bales. The round baler picks the hay from the ground and feeds it into the bale chamber.

The hay is then wrapped onto itself by a series of eight long rubber belts which are around seven inches wide. It is picked up and drawn into the baling system where   it becomes spherical and fills the bale chamber.

Exerts pressure upon the belts that is in turn monitored by way of the hydraulic system. When the recommended tension is reached, a signal is transmitted to the tractor operator and stops the operation.

Rectangular bales can be made to several different lengths but  majority are 8” for straw bales, 7” for hay bales, and around 4′ for silage bales which are wrapped in a protective film.

A tractor is required to move and stack these due to their weight and size. The hay enters the baler through the pickup and the teeth gently rake the hay from the floor to prevent rocks or debris entering the baler.

Behind the pickup is the compression bar which holds the hay in location so the auger can move it into the bale chamber. The bale is then compressed and cut to form the correct size and shape.

When the desired length and size of bale is reached, the bale is then wrapped with two lengths of baler twine or wire and is fastened securely.

The fastened bale is then released on the bale chute and falls to the ground or bale ejectors which project the bale onto a hay rack that is towed behind the baler.

Hay bales are produced in different sizes depending on the type and specification of machines being used. The sizes are as follows:

The parts of baler machine that need daily and weekly maintenance.

Looking for the best suppliers and seller of hay baler machines in Kenya, the best solution for you. Eunidrip Irrigation and Agricultural Machinery.

We offer our products at a relatively cheap price that can meet the targets our small to medium scale farmers. Additionally our prices are negotiable. Eunidrip Irrigation and Agricultural Machinery are located in Nakuru Town Center, just directly opposite to Nakuru County Assembly and next to Medicross Hospital along George Morara road.