Disc plough for sale in Kenya. 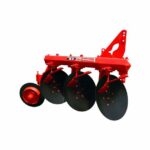 Disc plough cuts, turns and in some cases breaks furrow slices by means of separately mounted large steel concave discs. It is designed with a view to reduce friction by making a rolling plough bottom instead of sliding plough bottom. A disc plough works well in the conditions where other types of ploughs like chisel and mouldboard ploughs cannot be incorporated. They are equipped with heavy-duty tubular frame specially designed for deep ploughing and land preparation of rough soil.

Field conditions where Disc plough can be applied.

Disc plows are categorized into three main categories as tractor drawn, bullock drawn and according to mounting of the discs. 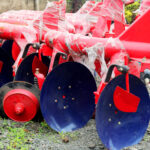 The reversible  standard disc plough are usually of mounted or semi-mounted type and have an arrangement to reverse the disc angle at each end of field to permit one way plowing. They are used in hard and dry soil. The disc tools are forced into ground by effect of gravity upon its mass rather than suction. 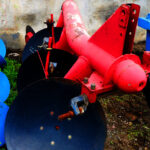 The common disc ploughs consists of the following parts.

This is where all the system components are attached. It has provision for disc angle adjustment, adding or removing standard and discs.

To stabilize the plough and take side thrust, rear furrow wheel is fixed at end

This is a device used to remove soil that tends to stick to working surface of a disc for great pulverization to furrow slice. It inverts the furrow slice and covers the trash better. They are of three types namely: Disc scraper used in non-scouring soils, board scraper used to turn over soil and trash, and hoe scraper used in sticky soils conditions.

This is a circular, concave revolving steel plate used for cutting and inverting the soil. The angle of operation is called disc angle, which is the angle at which the plane of the cutting edge of the disc is inclined to the direction of travel.

Is the flat plate which bears against and transmits lateral thrust of the plough bottom to the furrow wall. It helps to resist the side pressure exerted by the furrow slice on the moldboards. It also helps in stabilizing the plough while it is in operations.

It is an important extension of moldboard which helps in turning a furrow slice.

Proper adjustments that should be made on a disc plough. 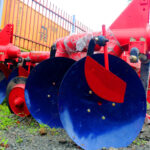