mouldboard for sale in kenya

MOULDBOARD PLOUGH FOR SALE IN KENYA.

Mouldboard plough is an implement that cuts soil, lifts it, and turns it at least partly upside down by means of a curved plate, or moldboard. 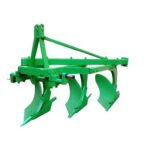 The mould-board plough greatly reduced the time needed to prepare a field and so allowed a farmer to work a larger area of land.

In addition, the resulting pattern of low (under the mould board) and high (beside it) ridges in the soil forms water channels, allowing the soil to drain.

In areas where snow build-up causes difficulties, this lets farmers plant the soil earlier, as the snow run-off drains away more quickly.

There are three main types of mouldboard ploughs namely:

One-way plough throws the furrow slice to one side of the direction of travel and is commonly used everywhere.

Reversible mouldboard plough turns furrow slice to the right or left side of direction of travel as required. They have two sets of opposed bottoms.
All furrows can be turned towards the same side of the field by using one
bottom for one direction of travel and the other bottom on the return trip Two sets of bottom are mounted that they can be raised or lowered independently or rotated along an axis.
They have an advantage in that they neither upset the slope of the land nor leave dead furrows or back furrows in the middle of the field. 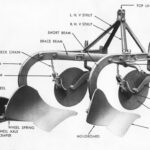 It is that part of the plough bottom which penetrates into the soil and makes horizontal cut below the surface.

It is the curved part which lifts turns, and pulverizes the soil slice. It has a fairly long mould board with a gradual twist, the surface being slightly convex.

It is the flat plate which presses against the furrow wall and prevents the plough from lateral swinging. The rear part of land side is called heel which slides on the bottom of the furrow.

It is the part to which share, land side and mouldboard are attached. It is that part of the machine bottom to which the other components of the plough bottom are attached.

It is an adjustable extension, which can be fastened to the rear of the mould board to help in turning the furrow slice. This is where share, landside, mouldboard are bolted to the frog which is an irregular piece of cast iron.